View source
watch 01:55
Cobra Kai Season 4 - The Loop
Do you like this video?
Play Sound

Wesley Earl "Wes" Craven ✝(born August 2, 1939-August 30, 2015) was an American film director and writer, perhaps best known as the director of many horror films, including  A Nightmare on Elm Street and Wes Craven's New Nightmare, featuring the iconic Freddy Krueger character, the Scream films, alongside The Last House on the Left, The Hills Have Eyes, The Serpent and the Rainbow, The People Under the Stairs, Vampire in Brooklyn, Red Eye, and My Soul to Take. He portrays Fred in Scream. He died after a long fight with brain cancer on August 30th, 2015. 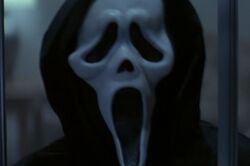 The only occurrence where Wes Craven portrayed Ghostface.