View source
watch 01:55
Cobra Kai Season 4 - The Loop
Do you like this video?
Play Sound

Cause:Stabbed in back, chest and stomach with knife by Charlie Walker

Robbie Mercer was a teenage boy, approximately seventeen years old, who attended Woodsboro High School and was the Vice President of the Cinema Club. He was seen commonly with a headset and/or video camera near his face, while constantly pestering people with questions.

Robbie was the eighth character to fall victim to the fourth Ghostface killing spree during Scream 4. His character blends a combination of similarities between Randy and Kenny from the original Scream.

Robbie is firstly viewed as a funny, geeky, but slightly tedious, horror movie nerd, who is the vice president of the Cinema Club alongside Charlie Walker. He harbors a love for technology and is a feathery source of comic relief. He likens himself to Randy Meeks from the first three Scream movies. He is part of the Jill, Kirby, Charlie, Olivia and Trevor's friend group. He also co-hosts the Stab-a-thon.

During the beginning of the movie, Robbie is seen alongside his good friend, Charlie, annoying several people at school with questions. Once Jill and her group of friends arrive, he and Charlie revert their attention to them and proceed to talk; particularly flirting with Olivia. He asks them, "What is your favorite scary movie?" like in the original movie which promptly bothers Olivia into a snotty response, gets a discerning response from Jill and a sarcastic response from Kirby. Robbie senses Charlie obviously flirting with Kirby and later tells him she is just playing him. It ends up his advice is true, for Kirby confides in Jill at her locker that she enjoys toying with the Cinema Club president.

After several killings that follow the opening of the film, Gale Weathers manages to find him and Charlie. She announces that she would like to work together with the duo, to which Robbie seems excited for. He tells her he loves her. After discussing the topic with Charlie, they invite Gale and Sidney to attend one of the school's Cinema Club meetings. The next day at the film club, Gale and Sidney show up in order to get more information. Charlie deduces that the killer is following the rules of a remake/reboot, and thus is upping the ante from the original films. In fact, the only way to be totally safe, according to the rules, is to be gay. The next logical step in the new spree would to actually film the murders. Charlie realizes it looks like he's implicating Robbie, and quickly backpedals. They look at the original spree, which culminated in a house party massacre; the only logical place for the next killing to happen would be there. Gale asks about what is going on tonight and Charlie says they are having a Stab marathon at an undisclosed location. Gale presses for the address, but the kids won't give it up.

Later, Robbie and his friends are all seen at the Stab Marathon, excluding Jill, for her mother forbid her to go. It ends up that Gale finally uncovered the location of the party, which was at an old, abandoned barn on the outskirts of Woodsboro. She is seen setting up cameras within the dusty barn until Ghostface appears for another attack and disables the camera she set up. This sudden event causes him and his immediate friends to relocate to Kirby's house rather drunkenly. At Kirby's home, Kirby and Charlie are seen to be uneasily joking about what just happened though Robbie is upset that the police shut down the party, soon Jill, (for Kirby invited her over after their

departure from the party) arrives and joins them in discussing about what just occurred. Charlie is putting on the movie Stab 7, saying nobody stops his marathon when Trevor unexpectedly appears, claiming that Jill sent him a text telling him to come over. Apparently, nobody seems to want him within the house.

prove she didn't send him a text and Trevor follows, leaving everyone else downstairs. Robbie is rather drunk at the moment, so he loopily excuses himself and heads outside to do a podcast. While he's recording, he drunkenly states that he thinks his buddy Charlie will get the girl (referring to Kirby). Once again, his relationship statement ends up being true, for while he is gone, they share a kiss inside.

While outside shortly after the kiss he is suddenly attacked by Ghostface; upon being stabbed in the chest and the back, he crawls away and tries to save himself by confessing to being "gay....if it helps!"

Ghostface ignores this and stabs him in the stomach. Robbie, now drenched in his blood around his mouth and clothes, is next seen struggling to get to the front door of Kirby's home, where he warns Jill, Kirby, and Sidney of Ghostface's presence before finally dying in front of them. The killer was Charlie as Jill was inside the house at the time of the attack, Charlie later admits that after he and Jill reveal themselves as the killers to Sidney that he has great footage of his "Robbie kill." 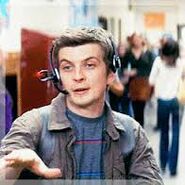 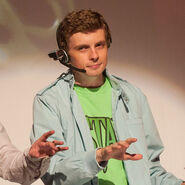