Cause: Stabbed multiple times with knife by Mickey Altieri

"I'm just saying that the horror genre is historical for excluding the African American element."
—Maureen to Phil Stevens

Maureen Evans was a Windsor College student, who was murdered by Ghostface along with her boyfriend, Phil Stevens, at the opening of Stab.

Maureen was the second character to fall victim in the second Ghostface killing spree.

Maureen and her boyfriend are going to see a preview of the film Stab. Almost everyone in the cinema is wearing Ghostface masks, including her boyfriend.

When he goes to the bathroom, he is stabbed through the side of his head by the killer. The killer then steals his jacket and pretends to be him, when they sit next to Maureen in the cinema. The killer stabs her seven times in the crowded cinema. She climbs up on to the stage and lets out a final wail. Then, just as the crowd notices she has been stabbed for real, she drops dead on stage.

In the aftermath of her death, Gale Weathers and Dewey Riley explain from her name, Maureen, that the killer is replicating the original Woodsboro killing series because Maureen is the same name of Sidney Prescott's mother, the first victim of the Woodsboro killers.

Maureen is killed by Ghostface, who dresses in her boyfriend's coat and keeps the mask on to conceal their identity, as they return to the theatre, where Maureen is sitting. She believes the killer to be her boyfriend, but after having blood rub upon her hands from the coat, discovers otherwise. Then, the killer pulls up a knife and stabs Maureen in the stomach first.

Maureen tries to flee but is stopped continuously stabbed in the back by the killer in the aisle of the theater, leaving her to collapse to her bloody death before the whole viewing audience of Stab realize, she is dying for real.

She was killed for the simple reason of sharing the same name as Sidney Prescott's dead mother, who was killed by the original Ghostface killers. 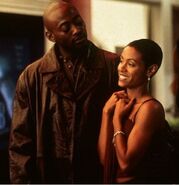