Deputy Judy Hicks is a character in Scream 4 (2011) and the upcoming fifth film, simply titled Scream (2022). She is a deputy police officer who works with Sheriff Dewey Riley. She is now a Sheriff in Scream (2022)

Judy was a classmate of Sidney during high school at Woodsboro High. They shared the same homeroom and were in drama class together. However, Sidney didn't remember her. Eventually, she decided to become a police officer and Dewey Riley was her idol. She succeeded in becoming a police officer and later a deputy in Woodsboro with the sheriff, Dewey Riley, being her idol. She developed a crush on him.

Judy first appears with another officer taking down Ghostface costumes from lamps. Dewey arrives and they greet each other. Judy showing a certain preference apologizes for the ghostfaces costumes of the lamps and wishes she was old enough to have been on the force while he was working on those crimes. Even saying, "It's those intense investigations that really bond relationships." She goes on to ask about his wife, Gale (whom she is probably asking simply to meddle.) She then tells him that she baked him lemon squares. They suddenly get a call saying that they should got to the Randall house because Jenny Randall and her friend Marnie Cooper were murdered. When they get there Judy starts taking photos of the brutal crime (Only shown on a deleted scene). Jenny was gutted and tied to a chair while Marnie was hung from the ceiling fan. She, along with Dewey, go to Sidney's book sale where they have traced a call from the killer's cellphone. When Gale asks Dewey what's going on, Judy tells her to let the police handle it. Gale tells her that she is speaking to her husband. They trace the call coming from Sidney's car and when they open the back door the find copies of Sidney's book Out of Darkness along with blood and a Ghostface mask. When Gale tries to see what's inside Judy stops her, but eventually lets her see what is there.

While at the police station, when Gale goes to see Dewey, who is inside his office, Judy stops her and Gale sarcastically asks if she is gonna arrest her to which Gale tells her that she doesn't mind the fact she has a crush on Dewey or that she baked him lemon squares to draw him in, but that if she wants to start acting like him she must put a mustache on cause she sounds ridiculous, Gale tries to open the door while Judy they start saying each other's name out of frustration. Dewey seeing this goes and opens the door where Gale tells him he should explain to "Betty Crocker" that she has every right to be here since she has helped solves this crimes three times before. When Judy tells Dewey that Gale wants to be part of the investigation, Gale asks her if she is familiar with the phrase: "I wrote the book on this", referring to The Woodsboro Murders. She hears the two of them fighting and, when Gale exits, she tells her, that her lemon squares taste like ass, which makes her a bit upset, but Dewey tells her they don't and she thanks him.

After Jill is done being questioned by the police, Jill invited Sidney to her house, as she is family. Officers are now keeping watch over the Robert's residence. Dewey is holding a plan in case of an attack from ghostface which Judy, Hoss, and Perkins are all participating. Later, after Sidney has checked on Jill in her upstairs room, Judy startles Sidney, as she is in the dark. Judy apologizes and starts down the stairs, but asks Sidney, "You don't remember me, do you?" Sidney replies, "Sorry?" Judy continues by saying "We went to high school together.... Judy Hicks..." and saying they had homeroom and drama club together. Sidney still can't recall. Judy seemingly a bit upset says, "It's okay, you've had.... a lot of stuff... going on back then." Sidney reluctantly agrees in her mind, she knew her before by saying, "Well, it's nice to see you again, Judy." A smiling Judy replies, "You too."

After Kate have been murdered, Deputy Hicks arrives and Sidney tells her that Kate's dead. Hicks, seeing the body, calls Dewey and reports the news on the late Kate Roberts while also mentioning that Hoss' and Perkins were found dead in their police car two blocks away with multiple stab wounds. Sidney, who is still sobbing, trying to escape to Kirby's house to find Jill runs into Judy whom claims, she saw someone on the side of the house . As she attempts to apologize about the casualty of her aunt to Sidney, she discovers Sidney has fled.

Later, after Dewey realizes that the killer is Jill Roberts, he calls Judy for backup. Gale goes with them and they attempt to defeat Jill. Dewey is knocked out, and Judy saves Gale and herself by throwing them behind a hospital bed for protection against Jill's pistol. When Jill orders them to get out from behind the bed, Judy tries to be like Dewey once again, but Jill shoots her in the chest. After Sidney kills Jill, she, Dewey and Gale think, that Judy is dead, but she stands back up, shocking them. Judy reveals, that she wore a bulletproof vest and pretended to die once she was shot: "Wear a vest, save your chest!"

However, as soon as she says it, she faints out of exhaustion.

Judy will appear in this film. 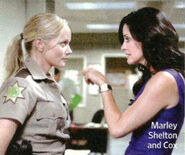 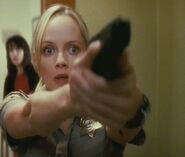 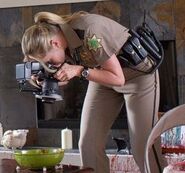