Cause: Stabbed four times in the chest with a knife by Mickey Altieri

"Did you get that on film?"
—Hallie to Joel Jones

Hallie McDaniel was a main character and Sidney Prescott's companion and best friend at Windsor College. She was killed by Ghostface while trying to escape with Sidney.

Hallie was the seventh character to fall victim in the Windsor College Murders and the second Ghostface killing spree.

Hallie is seen to be sharing a room with Sidney at Windsor College. After being told to turn on the news, she becomes aware of Maureen Evans and Phil Stevens being killed the night before by a Ghostface copycat. She encourages Sidney to get more involved on campus by attending Lois and Murphy's party. She is seen to be flirting with fellow Windsor College student, Mickey Altieri. She becomes offended when Mickey insults the Delta Lambda Zetas.

Hallie is later seen with Mickey after Cici Cooper.

She is seen to be visibly shocked after Derek is attacked by Ghostface. After Randy is also killed, she comforts Sidney. When Sidney was under 24/7 protection, Hallie goes with her and the two bodyguards. After the bodyguards are both killed, Hallie and Sidney are caught in the back seat with the doors locked. After Ghostface crashes the car and is unconscious in the driver's seat, Sidney realizes the only way out is through the window at his side. After Sidney escapes through the window, she encourages and supports Hallie as she does the same.

Sidney, wanting to know who the killer really is, runs back to the car but sees that he is gone. When Sidney shouts out this to Hallie, Ghostface jumps out from behind the rubble and grabs Hallie. Unable to escape, Ghostface is easily able to stab Hallie four times in the chest before throwing her dead corpse on the ground. Sidney, horrified, runs in the opposite direction. 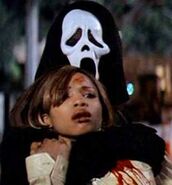 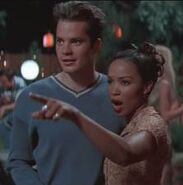