Cause: Shot in the chest with pistol by Mickey Altieri

Derek Feldman was a main character in Scream 2, as the antithesis of Billy Loomis and the boyfriend of Sidney Prescott.

He was portrayed by Jerry O'Connell, and also the eighth and final character to fall victim to the second Ghostface killing spree.

"I would never hurt you."
—Derek's famous last words, before dying.[src]

When Sidney and Randy are talking, he comes to visit him, which makes Randy a little jealous of him and Sidney.  He later goes to Delta Lambda Zeta Soroity party with the others, later Ghostface attacks Sidney, he runs into the house and tries to catch Ghostface. However, during the short chase, Derek's arm is slashed by the killer, who is able to get away. Luckily, no vital areas were injured, but this only makes him more of a suspect.

When he serenades Sidney in the cafeteria, he gives her a necklace to show her how much he loves her; which causes his fellow frat boys to hang him from a cross at a party. Ghostface kidnaps him and hangs him on the stage in the auditorium.

As Sidney goes to untie him, Mickey Altieri, who at this time has revealed himself as the killer, tells her that Derek was his accomplice in the murders, which is a lie. However, it makes Sidney panic and distract her long enough, for Mickey to shoot him in the heart, mortally wounding him. Derek tells Sidney he would never hurt her, and slowly dies.

Derek's death is particularly heartbreaking for Sidney, since she mistakenly believed him to be the killer, and faulted herself for letting him die. Mickey taunts Sidney for her mistake, saying that Derek was everything she wanted, he was funny, nice, handsome, a good singer, and was studying to be a doctor. He then mocks her about her dead mother, saying that "he was just the kind of guy you'd like to take home to mom, if you had a mom!", much to the frustration of Sidney. 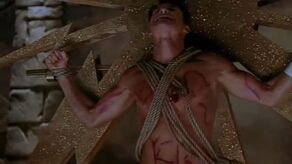