Survival horror
Dead by Daylight is an indie horror game developed and published by Behaviour Digital Inc.. Dead by Daylight is both an action and survival horror multiplayer game in which one crazed, unstoppable killer hunts down four Survivors through a terrifying nightmarish world in a deadly game of Cat & Mouse. It was released on June 14, 2016 for PC, June 20, 2017 for Xbox One and PS4, September 24, 2019 for Switch and April 16, 2020 for Mobile.

CHAPTER XII: Ghost Face® is the twelfth Chapter DLC for Dead by Daylight .

Ghost Face is a brand-new Chapter for Dead by Daylight. Purchasing the Ghost Face DLC will unlock its new Killer, however, it does NOT currently include a Survivor.

Acquaintances are a dangerous deception. Our workplace is filled with them; strangers who happen to sit next to us, five days a week. A distant familiarity grows from habit. Whatever they like to do on evenings and weekends, we presume to be commonplace. The blanks are filled in with assumptions and we forget how little we know, until proven otherwise.

The Ghost Face took full advantage of that fact. His entourage at the newspaper could have spotted that the Roseville murders led to him. There were clues early on: the days he missed work, the victims’ assigned time of death, and the detailed articles he wrote citing “sources” he never shared. But his coworkers had not seen the connections, because The Ghost blended in the everyday.  No one thought that the man seated on their left could be responsible for the murder of a dozen people in cold blood. Not until proven otherwise.

The Ghost Face had gotten away with it, just as before. After making the headlines, he’d collected enough articles and fame to move on to another challenge. He’d packed his bags when the investigation pointed to his direction and driven a few miles, heading to another job. Except this time, he found a unique, richer hunting ground…

At first glance, Jed Olsen was a kind and enthusiastic freelancer with experience in various small newspapers. He was hired at the Roseville Gazette, whose staff appreciated how easy-going he seemed. Olsen didn’t have to justify his erratic career path, which zigzagged between Utah and Philadelphia. He had a good attitude and a decent portfolio, which showed he’d covered serious news such as unsolved murders. Most importantly, he was ready to start right away.

Five months later, the Roseville Murders began: victims ranging from young to old, stabbed to death in their homes. The whole staff was working the story. Olsen was sent to interview the family of victims and relay official statements from the police.

The number of victims surged as Olsen worked the story. To heighten the swelling panic in Roseville, Olsen produced the footage of a hooded figure breaking into a house at night. Olsen’s masked face, a white blur in the dark, stared at the camera for a second, before disappearing inside. “The Ghost Face Caught on Tape” was the title Olsen gave the article. He was proud of his work, enjoying how the whole town now feared a ghost story.

When the investigation started to point in his direction, he had written and collected a dozen of articles, all of which fed his legend. He left Roseville swiftly. After such a feat, finding a satisfying challenge would be difficult. Yet opportunity found him.

Unlocks potential in your Aura-reading ability, sharpening your keen senses in the dark Realm of The Entity .

Any Survivor  performing a rushed action within 48 metres of your location has their Aura  revealed to you for 6 seconds.

"There is no need to worry. I've been preparing my whole life for this." — The Ghost Face

Your dark designs and shrewd composure rouse The Entity .

After picking up a Survivor , all Generators  not currently being repaired by Survivors are blocked by The Entity for the next 16 seconds.

"The night assists me and it's endless here." — The Ghost Face

You become obsessed with one Survivor.

You lurk in the shadows, eliminating your victims one by one.

You can only be obsessed with one Survivor at a time.

"You have no idea what I have planned for you. It'll be in the news for weeks. I'll make sure of that." — The Ghost Face

A stolen camera from a victim of Olsen in Philadelphia, where he worked before. The film inside captured his last night in the city.

"Gotta love Philly: keeps giving and giving and I don't wanna forget any of it". — The Ghost Face

A sheet of matches from Walleyes, a small bar in Northern Roseville.

A victim's phone number is scribbled in blue.

One of the incriminating pieces of evidence found.

Cut-outs of articles covering unsolved murder cases from Utah to Pennsylvania. While Ghost Face just authored some of the headlines, he committed all of the murders. Compiling your success makes you proud and boosts your confidence.

Dollar store cologne with a pungent scent of rubbing alcohol. Worn by The Ghost Face to make his presence known. Reserved for impromptu visits.

A manual focus lens to remain undetected while taking pictures from afar.

Black straps that keep everything in place while on the prowl.

All the Roseville murder victims are listed there, along with their phone number and address.

The annotated map of Northern Roseville, Florida. Each 'X' represents a victim of The Ghost Face. Mapping out your targets allows you to roam the streets undetected.

A quiet and flexible sheath to carry your blade. Movement is easier when things are fastened into place.

An overpowering musky fragrance worn by Ghost Face to announce his presence. Reserved for the victims he planned to write about.

A perfect belt clip to scout carry your blade discreetly. No one knows what you are planning to do tonight.

A blue pen with a chewed cap that holds traces of Danny's DNA.

Incriminating evidence that was never found.

A ripped page outlining the weekly routine of Olsen's first victim in Roseville. Compiling your victim's habits allows you to anticipate their movements.

"I've been watching you for a while. I wanted this to be special; the kind of headlines that people don't forget". — The Ghost Face

A sheath allowing for a full motion range: ideal to inflict quick and powerful wounds while moving freely. Stolen from a patrol officer the night Danny left Philadelphia.

"Gotta get ready like a scout — without the stupid patches. What I get is much better." — The Ghost Face

"They all want to know who Ghost Face is. But what they should ask is, who's next." — The Ghost Face

A tape obtained by Olsen to write an article that terrorised Roseville.

"In this footage, a dark figure is seen entering a house late at night in Northern Roseville, Florida. The police were called the next morning to report a murder in the area. Lock your doors: a Killer is in our midst, roaming freely, like a ghost in the night." — The Roseville Gazette

A small surveillance camera that filmed Ghost Face breaking into a house on Belleview Road in Northern Roseville. The camera was positioned at the perfect angle to catch a glimpse of Ghost Face without providing any real clue to the police.

"An image is worth a thousand words". — The Ghost Face

On June 19, 2019, Behaviour Interactive Inc. announced the plan to release Dead by Daylight to iOS and Android for free in an attempt to make the game more accessible to players around the world. A different development team was formed that is fully dedicated to optimizing the game for the mobile experience. Dead by Daylight Mobile was initially slated for launch in 2019, however the developers had to push the release to 2020, citing their need for more time to work on bugs and optimize. On February 27, 2019, Behaviour announced that the mobile versions will be published by Chinese video game publisher NetEase Games in Southeast Asia, Japan, and Korea. It was released in EMEA, the Americas, and South Asia on April 16, 2020. 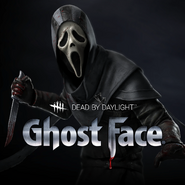