"I don't know about homicide, but you've definitely got me for raising my voice in a public library."
—Cotton Weary in Scream 2

Cause: Stabbed in head with knife by Roman Bridger

To become famous and to be a tv show host

Deceased
Cotton Weary was a main character and Woodsboro resident, who was sent to jail for the rape and murder of Maureen Prescott, because Sidney Prescott was sure she'd seen him leaving their home the night she discovered her mother's dead body. He was released from prison a year later when Billy Loomis and Stu Macher revealed they killed Maureen and framed Cotton. Opportunistic, he sought fame and fortune with Gale Weathers' help and finally achieved it after saving Sidney's life at Windsor College, even though he was a chief suspect during the second murder spree, however his name would be cleared and he would be proven innocent again. He parlayed the media coverage into his own show in Hollywood, 100% Cotton, before finally falling prey to a new Ghostface whose quest was to locate Sidney.

Cotton was the second character to fall victim to the third Ghostface killing spree in Scream 3.

Cotton had a secret affair with Maureen Prescott. She was murdered one night after they had sex and the killers (Billy Loomis and Stu Macher) framed him by one of them wearing his coat while leaving the house. Sidney saw the figure in Cotton's jacket and assumed it was him. Over the course of his trial TV reporter, Gale Weathers, frequently defended Cotton, saying he was innocent and that Sidney was lying. Going as far as writing a book about it, Gale insisted that Cotton was framed and subsequently falsely identified as the killer. Sidney's testimony was key in his conviction, which caused him to go to prison for Maureen's rape and murder for at least a year.

Sidney watched video footage of Cotton after he was sentenced. Cotton has now been sentenced to death and has been scheduled to be put in the gas chamber according to Gale. Sidney argues with Gale over Cotton's innocence. In the climax of the film it is revealed that the true killers of Maureen Prescott, Billy Loomis and Stu Macher, had framed Cotton for the murder. Between the first and second film, he was made a free man for the first time in a year.

After being released from custody, Cotton became a regular news feature. However, he expected more fame than he got. He agreed to accompany Gale to Windsor College for an interview and recorded meeting with Sidney after the double homicide of Maureen Evans and Phil Stevens. Sidney refused to participate, which particularly irritated Cotton, because Gale told him Sidney had known about it. Although innocent and compassionate, Cotton also proved to become quickly angered due to his wrongful imprisonment.

After Sidney was threatened in an instant message in the library, while the police were searching for its source, Cotton caught a freaked-out Sidney and demanded an interview with Diane Sawyer in an almost threatening way. Such an interview would finally clear his name but would only work if Sidney appeared on the show with him. Due to his rash actions, he became a suspect yet again. There was nothing to hold him for regarding harassment of Sidney so he was released. It was made obvious that he would not drop the matter and leave her alone. That night he found Dewey Riley bleeding in the film department and tried to save him. Gale ran into Cotton after just narrowly escaping the killer and found his hands bloody. She assumed he was the killer. He tried to explain but she refused to listen and ran away. He eventually found Sidney and the real killer, Mrs. Loomis, fighting to the death in the theater department. He picked up a gun and stopped the two. Sidney explained Mrs. Loomis and Mickey Altieri were the

two killers. Cotton was disappointed, Mrs. Loomis wasn't really a reporter named Debbie Salt but she argued that she could still help his career. Mrs. Loomis seemed to gain Cottons' loyalty by reminding him that Sidney sent him to prison for a year. However, Sidney finally gave in to the Diane Sawyer interview, so he took Mrs. Loomis by surprise and shot her. He assured Sidney, that he would never hurt her and handed over the gun. Gale revealed she was alive and the three left the building.

Reporters swarm around Sidney outside, mostly leaving Cotton alone, until Sidney, in order to cancel the debt she had over her erroneous testimony against Cotton, told them, they should get the story from him, adding that he was the hero. He finally got the attention he sought, understood Sidney´s actions and told her silently, the debt she had with him was settled and that she can go in peace.

Cotton became quite famous and moved to Hollywood over the next two years. He spun his fame into his own talk show, 100% Cotton. His personal life flourished as well. He started dating Christine Hamilton. While driving home from work one night, Cotton argued with his agent, Andrea, about scripts and stopping to do a cameo in Stab 3: Return to Woodsboro. Cotton then received a phone call while caught in traffic on his drive home one night. During the phone call, a girl deceptively tried seducing him and Cotton chose to play along. When the woman asked if his girlfriend knew, what he was up to, Cotton questioned her on, why she thought he had one. The voice on the other end then changed to Ghostface, proclaiming he knew Cotton had a girlfriend, because he was standing outside her bathroom door, watching her. The killer demanded to know Sidney's whereabouts. When Cotton refused to answer the question, Ghostface informed him that Christine would pay dearly for his silence, then hung up the phone.

Angry and fearing for Christine's safety, Cotton rushed through traffic, trying to get home in time to save her. When Cotton entered his house, he found Christine was still alive but Ghostface tricked her into thinking that Cotton was her assailant. He was confused when she claimed he wanted to kill her. She wouldn't trust the real Cotton and attacked him with a golf club when he tried to warn her about Ghostface being behind her. Not trusting

him, she swung at him with the golf club and Ghostface snuck up behind her and stabbed her in the back. Cotton attempted to fight back but Ghostface stabbed him as well. The killer glared down at Cotton before unveiling his multi-voice changing box (which has Cotton's voice built into it) and says, "It was a simple game, Cotton. You should've told me where Sidney was. Now, you lose." After stating this, Ghostface stabbed Cotton in the face. 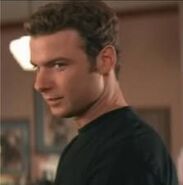 Cotton at the end of Scream 2.